Community Loses A Legend In 'Mr. B'; Memorial To Remember Brooks At ... - The Dispatch 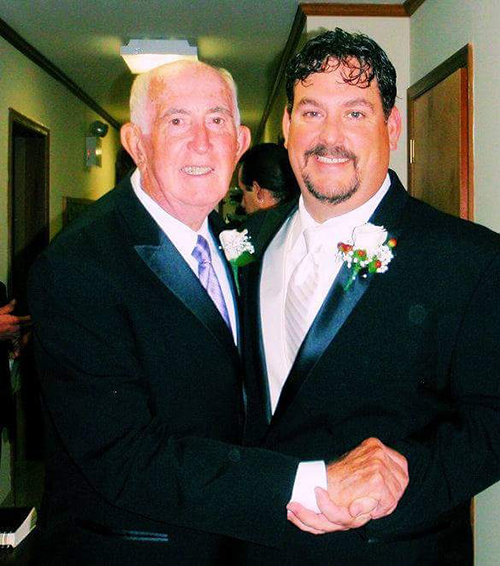 OCEAN CITY – The “heart and soul” of the Crabcake Factory has passed on but his warm smile and dancing shoes will never be forgotten.

Ronald John “Mr. B” Brooks passed away suddenly on March 18 at the age of 82 during a routine visit to the doctor’s office. A solid message rang out during his service held at Fenwick Island Baptist Church on Tuesday — “live today because tomorrow is never promised.”

Just days before Mr. B passed away he was seen at his youngest son’s restaurant dancing to live music during St. Patrick’s Day celebrations, which will carry on as a lasting memory for many.

Mr. B was a fixture at the Crabcake Factory, starting at the original location on 120th Street but most recently at the Bayside location on Route 54 as it was located near his Fenwick home. A sign saying “Mr. B’s Corner” has hung on the wall since the restaurant’s opening where he would sit drinking his Mountain Dew enjoying the company of staff and patrons.

“Bayside was such a blessing not only because it was down the street but because it was a whole new crowd for us. He instantly made that his place and took it upon himself to meet and greet every customer new and old,” Crabcake Factory owner John Brooks said. “People just loved his smile and genuine warmth. He never spoke to anyone without a gentle touch and a smile. I was with my brother all week and noticed they have the same mannerisms. It was weird but makes me think of how he just connected with people. He was eloquent in almost every situation, which is where I get my calm demeanor in crisis. He has given me so much that I don’t even realize.”

The Brooks family has come together during this time as he leaves behind his wife Isabelle, his two sons, Ronald and John Brooks, and a daughter, Suzee Nolan. He was preceded in death by his daughter, Kimberly Brooks.

Nolan, and her husband, Ken Nolan, as well as John Brooks and his wife, Krista Brooks, will all be sharing a role in filling Mr. B’s role at the restaurants as they all live close by.

“There will never be another Mr. B, but I hope we can make people feel at home with us like he did,” John Brooks said. “If one good thing came out of it, the Brooks family is now whole again.”

“Those grandkids are the light of his life and will now keep my mom going hopefully for years to come,” John Brooks said.

According to John Brooks, Mr. B had a knack for leaving notes but as technology advanced his notes turned into text messages.

“He had just sent me a text saying ‘My goal is to make it to 90 [years old] son, then I can talk with all the girls [John’s children] and they will remember how much ‘P’ [short for Grampy] loved them,” John Brooks said.

A long-time Crabcake Factory employee will be building a memorial on the eastside of the Bayside location to remind all to remember Mr. B at sunset. A new tradition is also taking place at Crabcake Factory as a daily toast will be made in Mr. B’s memory at happy hour, as well as during University of Maryland Terps games.

Many knew Mr. B as an avid Maryland Terps fan. He was a three-sport star athlete at Anacostia High School in Washington D.C., and received a full scholarship to the University of Maryland to play basketball in 1950 even though baseball was considered his best sport. Mr. B played for legendary coach Bud Milliken, and with All American back court mate Gene Shue until graduation in 1954.

After college, Mr. B completed his education as an Air Force jet pilot and was stationed in Ann Arbor, Mich. until 1958. Mr. B and Isabelle Brooks were married on Nov. 25, 1966 and resided in Bethesda. Mr. B opened Brooks Advertising in Washington D.C. and was president of the Downtown Jaycees. In 1996, he relocated to the Eastern Shore.

“My dad belonged to everyone. I didn’t get that for many years. He was always Coach Brooks and several of his former players were at the funeral. It didn’t hit me until I spoke with them on how much he meant to them. A lot of them had less then desirable home situations and he had no problem being that surrogate father for all his boys,” John Brooks said. “He never missed one sporting event I was involved with in his entire life. I could always hear his voice through the crowd even when I got to Woodward High School in Bethesda where he was president of the Booster Club for three years and on to college at Shepherd University where he came to every practice and every game I ever played there traveling all over West Virginia.”

Mr. B organized the Terps on the Shore Golf Tournament benefitting many local and national nonprofits for 17 years like St. Jude’s, Wounded Warriors, Coaches for Cancer as well as his favorite cause — Ocean City youth sports. Lefty Driesell was the Honorary Chairman of the last several sharity events Brooks put on.

“Terps basketball was in full swing at the time [he passed] and we had regular visits from lots of old alumni and of course there was Lefty,” John Brooks said. “Lefty and my Dad were two peas in a pod. They looked alike and shared the same country boy humor and intelligence that kept people captivated.”

“Mr. B” could be found many days in the summer at the youth camps held at Northside Park in Ocean City helping out.

“He always had time for kids not matter what and loved Hondo Handy and the folks up there,” John Brooks said.

For his youngest son, it is still hard to believe he is gone.

“A lot of people didn’t get my dad’s and my relationship because they only saw what we allowed people to see in public … my father was not only the heart and soul of the business for almost 20 years but he was and is my heart and soul. Just like me, the business will go on and new generations of the family will pitch in and help us keep up his tradition of being more than just a restaurant. He considered these people his family and if there’s one thing I realized this week is that all of them were affected by his passing. I got to spend the last 20 years of my life seeing my Dad on a daily basis, almost like living with him, so there were some battles and differences of opinions for sure but at the end of the day regardless of what he did he was my father first, my friend second and my partner always,” John Brooks said.

It has been a week since Mr. B has gone and for his family every day it gets a little easier.

“I don’t think I will ever not wake up and think of where he is and hope he’s warm and happy. But I’m finding the things that made me cry are starting to make me smile. One day I hope they make me laugh,” John Brooks said. “I will see him again someday. My faith tells me this and I know he will be waiting, with a cold beer and a pile full of notes to guide me along. I miss my Dad, and so does everyone he’s ever touched.”